Anant U in News News Detail

The Contemporaneity Of Our Times | Vishnupriya Rajgarhia | BW Education 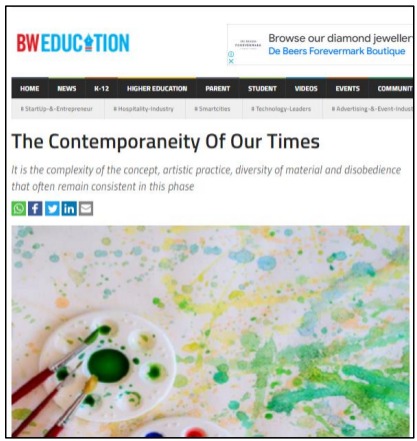 The Contemporaneity Of Our Times

Art has been written about through the lens of practices and periodisation in abundance, however, contemporary art has consistently eluded a set of stylistic characteristics to set it apart from its predecessor, the modern and post-modern period.

A gamut of practices has flourished under its banner including Banksy’s subversive graffiti works, Wolfgang Tillman’s provocative photography and Olafur Eliasson’s spellbinding site-specific installations, each a world in itself. This exists in contrast to the practices in India, where a large portion of the work we see flourishing even today remains anchored in postmodern practices, of video art, conceptual works or identity politics.

As our language or art-making continues to evolve, a well-researched phenomenon which had remained under the radar overtook the world in a split second. non-fungible tokens emerged as the go-to investment category, and the digital assets being bought and sold feverishly
opened a world of possibilities for younger artists. What was the tipping point for this, one will never know, but from April 2021 to January 15, 2022, the total value of sales amounted to roughly 150 million dollars with 44.6 thousand NFTs being bought/sold. It is important to note this peaked during the pandemic, where the majority of people in the arts sectors were rendered unemployable. Their dependence on the usual funding mechanisms came to a crashing halt.

This embracing of a larger audience and democratic participation of the artists in the industry has been the biggest disruptor of our times. It has touched upon longstanding issues of provenance, authenticity, as well as the opacity of art institutions such as galleries, museums, and festivals. In doing so, it has empowered an influx of creative expression to
become commercially viable. Any individual now has the power to produce a work that stands a fair chance to be collected by a patron, unaffected by institutional validation.

This phenomenon has pushed the post-studio artist to what I call the post-gallery artist.™

The world appears to be chasing after this gold rush but the concerns regarding the uncertainty of these investments hold merit in my eyes. While the digital art scene is booming, there are few or no measures that can guarantee the relevance of the artist five years from now or the authenticity of the work that can be plagiarized.

The west has adapted to it over a teething period, where this movement complements their sensibilities of artmaking. India and neighbouring countries, follow very different timelines and narratives, making the emergence of NFTs a welcome change but not permitting their complete integration into the ecosystem. Recently several platforms have come forth to announce curated platforms for NFTs ranging from art and cinema to sports. While the Picasso heirs announced an NFT collection of his never before seen ceramic works, a total of 1,010 bolsters confidence about its viability in the future, but cannot guarantee it.

This movement has led to the merger of art and technology and altered art investments irrevocably. It remains to be seen if this innovation will impact the art practices that have thrived in India for the past decade significantly, or ignite a parallel world where the risk-taking ability of practitioners and collectors are higher, and boundaries to this industry are
less opaque.