Life at AnantU is a heady mixture of aesthetic experiences rendered by design and architecture disciplines as they unfold in classrooms and studios, youthful verve as it expresses itself in diverse activities in and around the campus and delightful surroundings that comprise classrooms overlooking a lake and dense mango orchard. 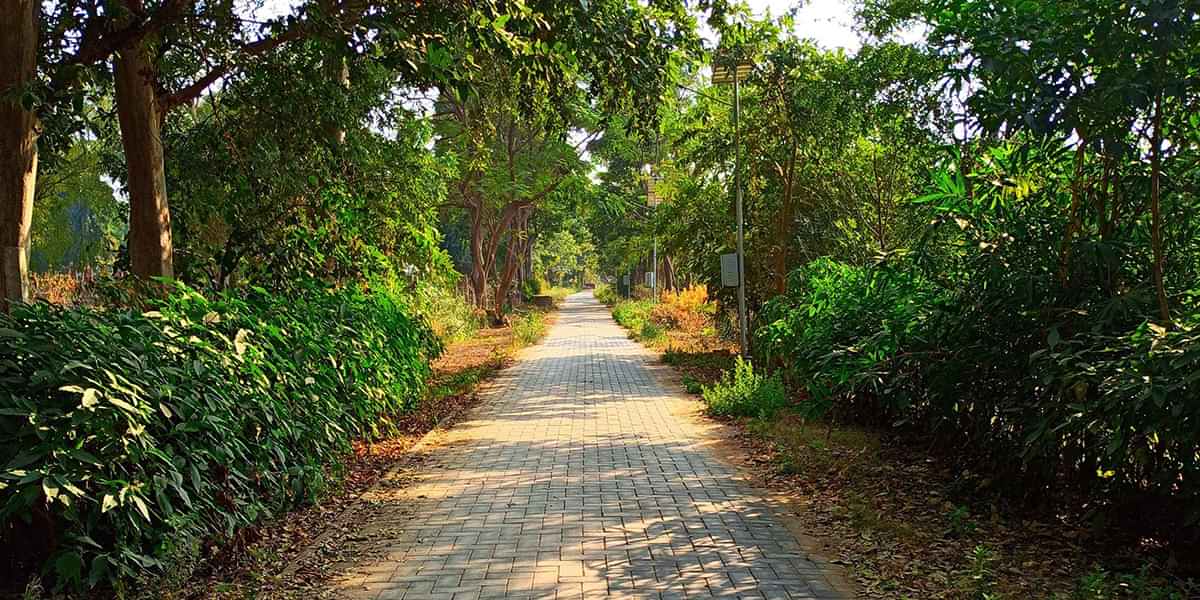 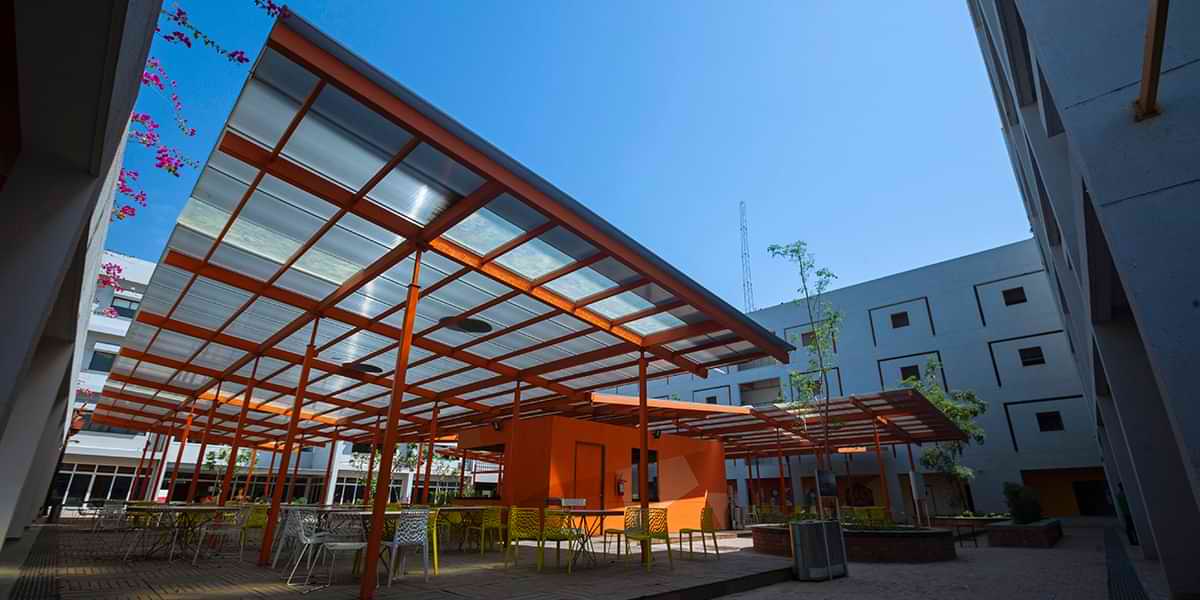 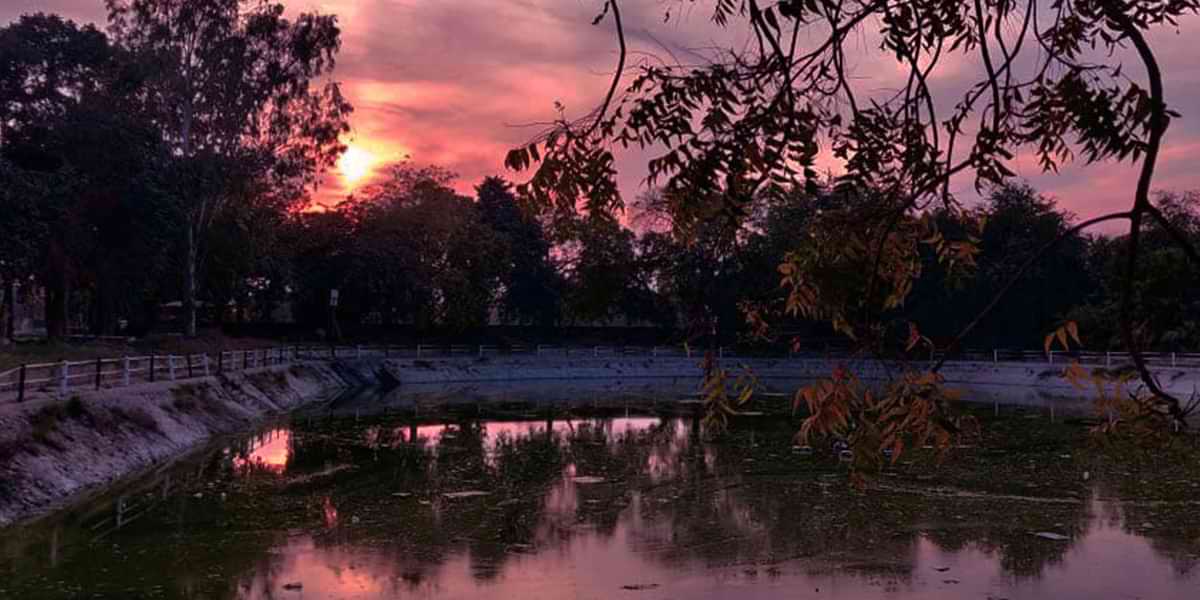 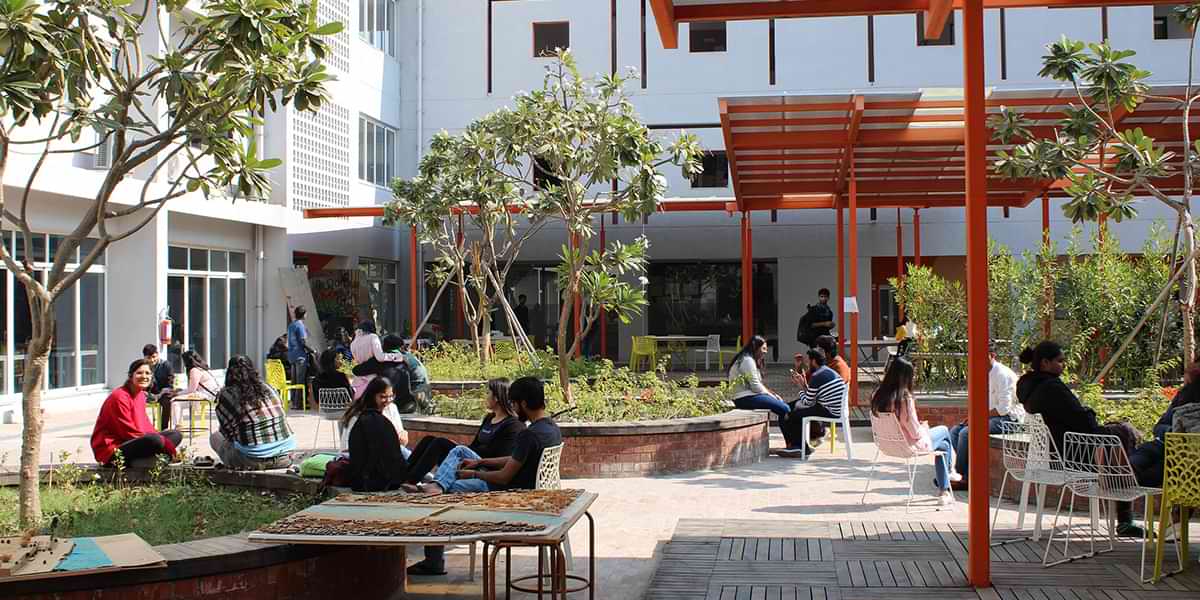 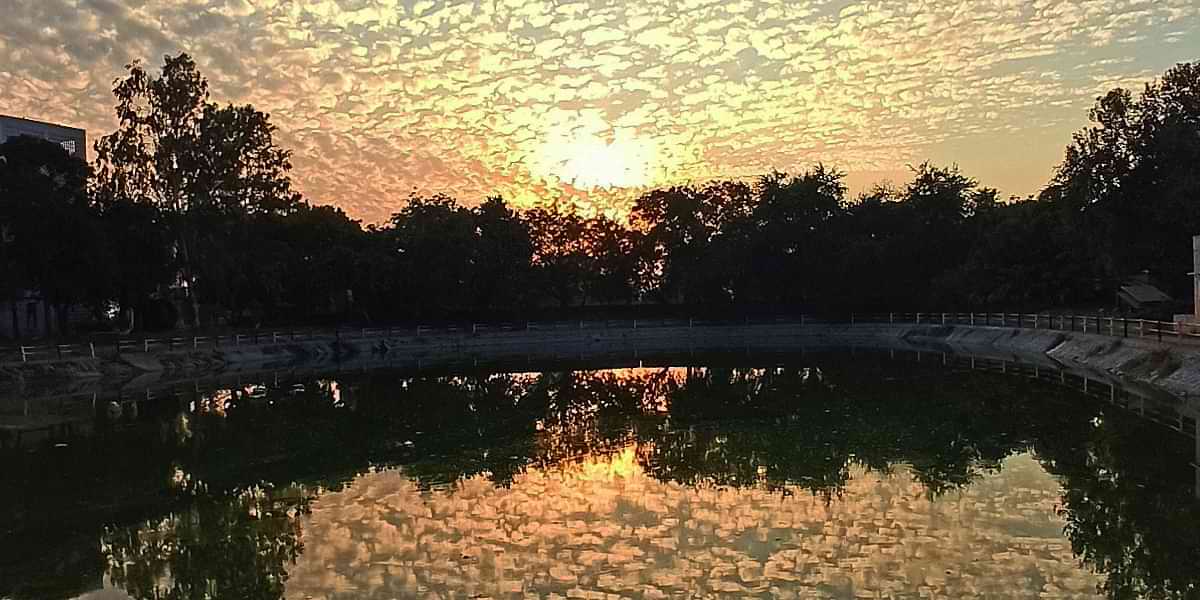 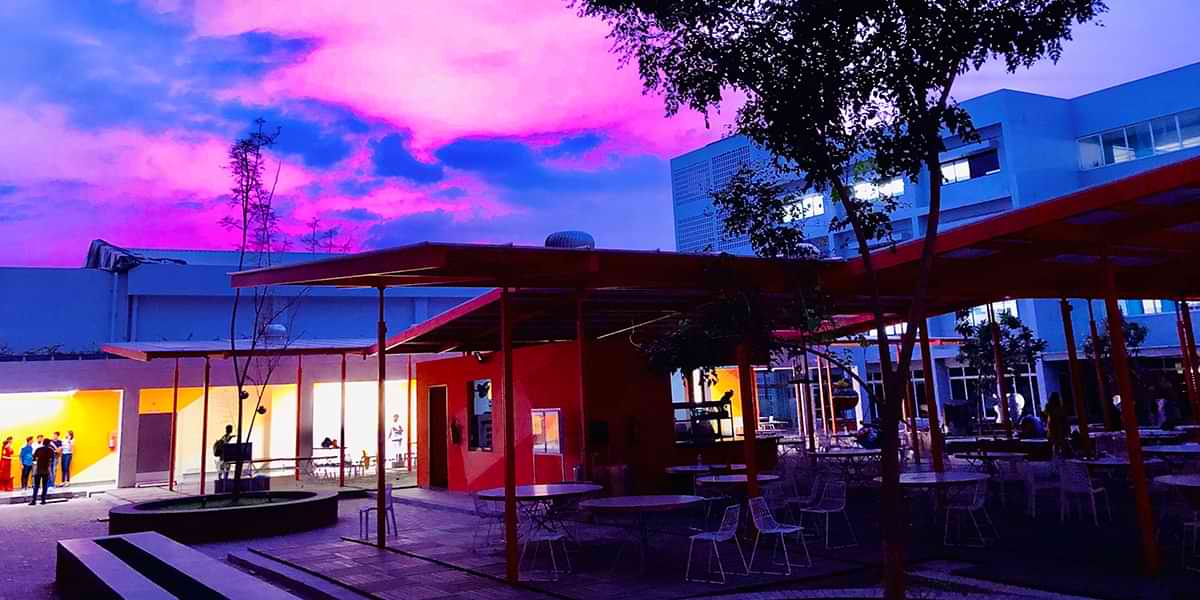 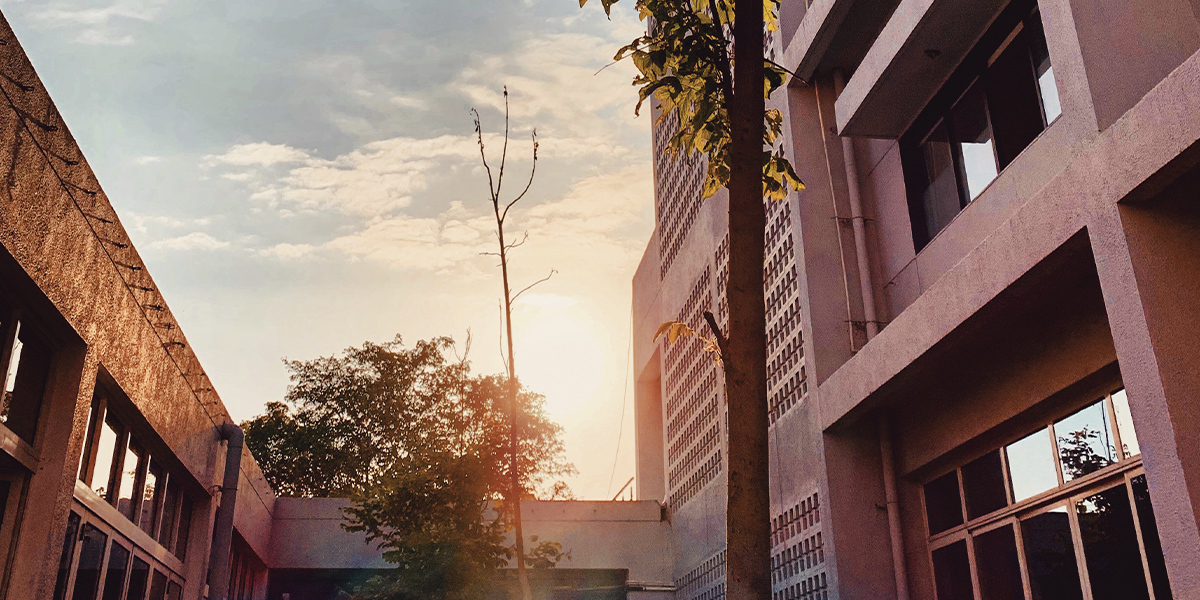 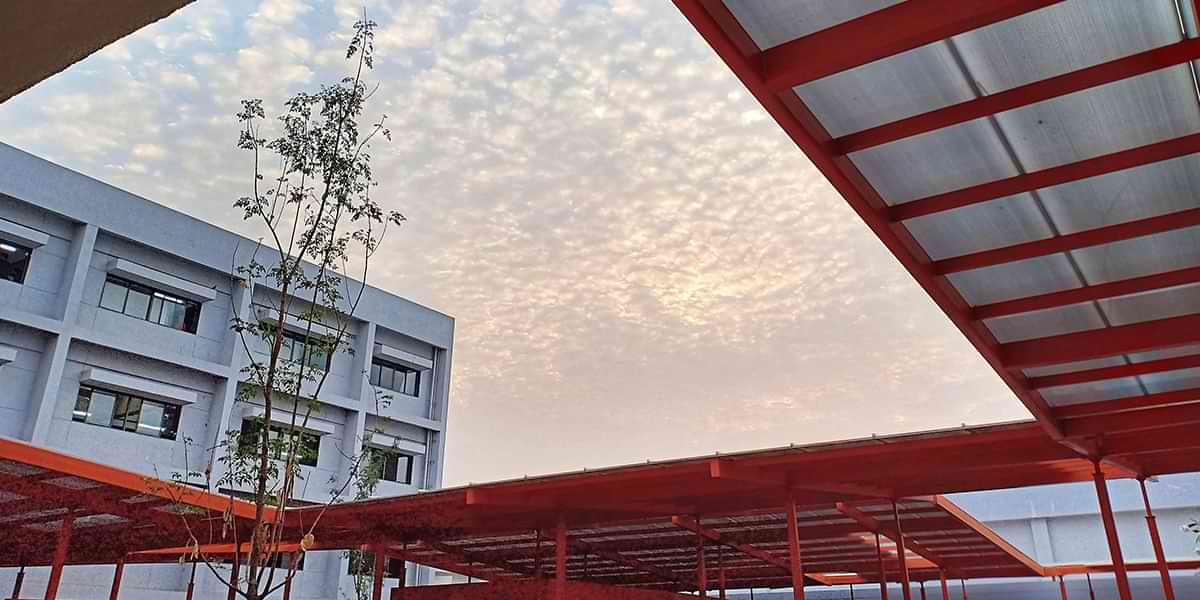 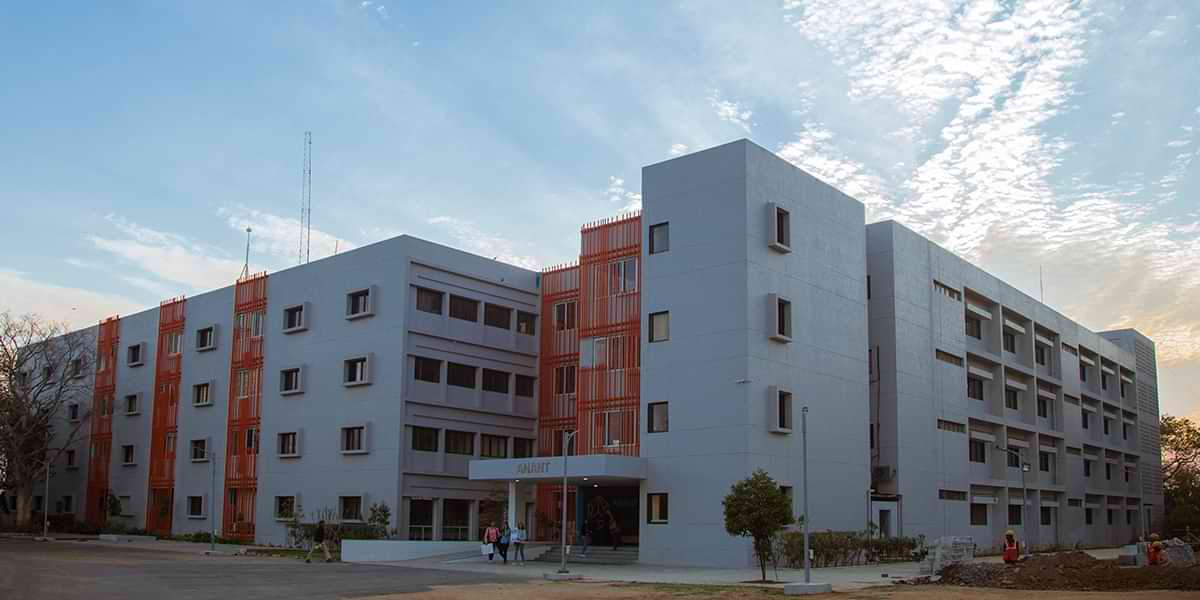 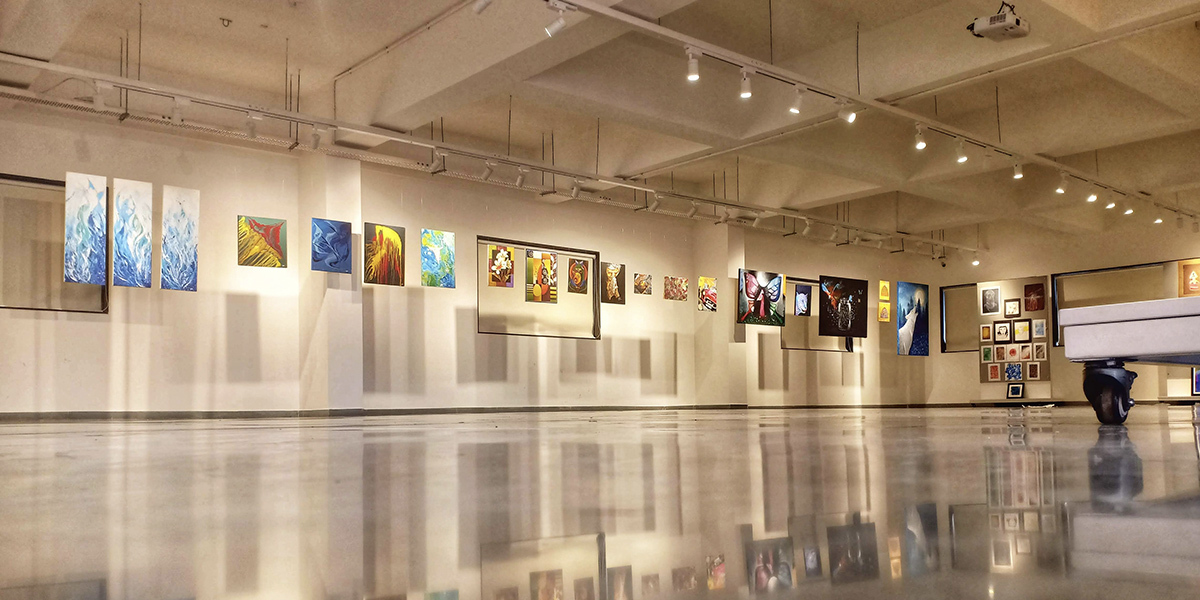 Ahmedabad is the thriving economic and industrial hub nestled in the heart of Gujarat with a rich heritage of architecture, design, textiles and food. Home to centuries-old architectural marvels with Mughal and Hindu influences, the city is best-known for preserving a rich tradition of architecture and design whilst charting the path for modern architecture in India with renowned internationalists like BV Doshi, Le Corbusier, Louis Kahn and Charles Correa.

The present city of Ahmedabad was founded by the 15th-century ruler Ahmad Shah, who built it as a walled city with architectural jewels like Jama Masjid, Bhadra Fort and Teen Darwaza. More marvels like the Sufi mosque Sarkhej Roza and the Sidi Saiyyed Mosque aka Sidi Saiyyed ni Jali, built by subsequent rulers and settlers, transformed the city into a hub of Muslim architecture.

The Hindu elements of the city were contributed by the vibrant merchant community of Gujarat. They built temples (like the famous Hutheesing Jain Temple), step-wells (most famous is the Adalaj ki Vav), marketplaces and engineered an intricate housing system known as ‘pols’ that have become synonymous with the identity of the city. Mahatma Gandhi chose to make Ahmedabad a centre for India’s independence movement in early 20th century and gave rise to a culture of non-violence and ‘Swaraj’, both of which are symbolised by the Gandhi (or Sabarmati) Ashram that stands on the tranquil banks of the river Sabarmati.

Ahmedabad transformed into a manufacturing hub in the 19th -century and contributed to India’s prominent ranking in the list of wealth-producing countries around the world. The textile industry birthed a culture of unique tradecraft while retaining the heritage of centuries-old Gujarati traditional textile practices like the Kutchi Bandhani, Patola sarees from Patan, Ajrakh printing and many more. The textile history of Ahmedabad (as well as India) is well-catalogued at the Calico Museum of Textiles that houses a massive collection of textiles and objects curated by well-renowned academics and practitioners.

Alas, a rendezvous with the city is incomplete without a trip to natural retreats like the Thol Lake or Nal Sarovar Bird Sanctuary that are among the favoured destinations of migratory birds like the rare White Tailed Lapwing. There is something for everyone in a city like Ahmedabad – a myriad collection of intricate timeless moments. Ahmedabad is considered to be one of the safest cities in India. With low crime rates and the culture of the neighbourly watch, one can live in the city with a feeling of security. The city has an active police force that promotes the safety of women on the streets and takes preventive measures for criminal activities. Additionally, the state of Gujarat is a dry state, hence alcohol consumption is permitted in the city only if one has procured a certificate or a license from the local government body. The local people treat outsiders with the utmost respect and are often friendly and resourceful that prove to be excellent traits for a guided tour of the city. While in Ahmedabad, one cannot miss the opportunity to be a part of the world’s longest dance festival – Navratri, where people of all ages gather in autumn to dance to the tune of folk music to celebrate the victory of Goddess Durga over demon Mahishasura. The winter festival of Uttarayan on January 14-15 is celebrated with colourful kites in the sky. During this time, Ahmedabad hosts an international kite festival every year on the riverfront along the banks of Sabarmati. During Uttarayan, one can spot most city-dwellers lounged on terraces, either delighting over winter delicacies or engaged in a kite-flying duel with a neighbour. Come festive season one can be assured of experiencing contagious joy and merriment. The food experience in Ahmedabad is varied. The city has a colourful street-food culture and many marketplaces in the city transform into a food-hawkers gathering at night-time, like Manekchowk, Bhatiyaar Gali, Law Garden, etc. For those who prefer to explore the local cuisine, the city has a wide array of dining areas that serve elaborate Gujarati thalis that are immersed in local flavour and culture. However, the simplest taste of ‘Amdavadi’ culture can be found at the local ‘chai kitli’, where one can hang out and engage in a conversation over a piping hot cup of tea.

AnantU values mental health which plays an important role in the overall well being of a student. To ensure the health of students, the University has established Bloom – The Centre for Wellbeing. The centre focuses on mental, physical and emotional wellbeing and encourages students to inculcate empathy, become confident and practice skills that lead to a conducive environment. The centre conducts various activities such as webinars and events to help students address their issues, suggest solutions to these and keep them positive throughout their journey at AnantU. The Student Council is a student representative body that supports the functions of the management team at Anant National University and acts as a bridge between the student body and the staff. They are elected representatives who ensure smooth functioning of the University in the spirit of collaboration and engagement. It resolves student queries and provides academic and non-academic support.