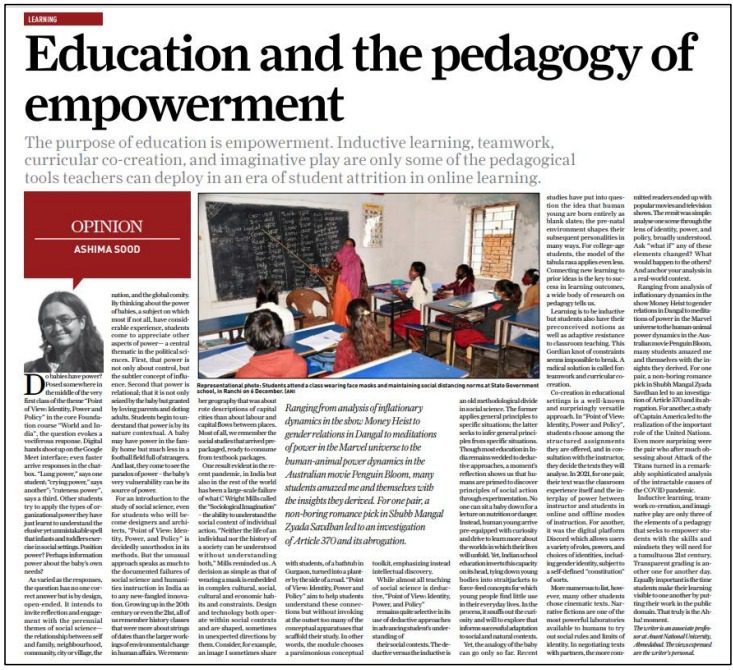 Do babies have power? Posed somewhere in the middle of the very first class of the theme “Point of View: Identity, Power and Policy” in the core Foundation course “World and India”, the question evokes a vociferous response. Digital hands shoot up on the Google Meet interface; even faster arrive responses in the chatbox. “Lung power,” says one student; “crying power,” says another”; “cuteness power”, says a third. Other students try to apply the types of organizational power they have just learnt to understand the elusive yet unmistakable spell that infants and toddlers exercise in social settings. Position power? Perhaps information power about the baby’s own needs?

As varied as the responses, the question has no one correct answer but is by design, open-ended. It intends to invite reflection and engagement with the perennial themes of social science— the relationship between self and family, neighbourhood, community, city or village, the nation, and the global comity. By thinking about the power of babies, a subject on which most if not all, have considerable experience, students come to appreciate other aspects of power— a central thematic in the political sciences. First, that power is not only about control, but the subtler concept of influence. Second that power is relational; that it is not only seized by the baby but granted by loving parents and doting adults. Students begin to understand that power is by its nature contextual. A baby may have power in the family home but much less in a football field full of strangers. And last, they come to see the paradox of power – the baby’s very vulnerability can be its source of power.

For an introduction to the study of social science, even for students who will become designers and architects, “Point of View: Identity, Power, and Policy” is decidedly unorthodox in its methods. But the unusual approach speaks as much to the documented failures of social science and humanities instruction in India as to any new-fangled innovation. Growing up in the 20th century or even the 21st, all of us remember history classes that were more about strings of dates than the larger workings of environmental change in human affairs. We remember geography that was about rote descriptions of capital cities than about labour and capital flows between places. Most of all, we remember the social studies that arrived pre-packaged, ready to consume from textbook packages.

One result evident in the recent pandemic, in India but also in the rest of the world has been a large-scale failure of what C Wright Mills called the “Sociological Imagination” – the ability to understand the social context of individual action. “Neither the life of an individual nor the history of a society can be understood without understanding both,” Mills reminded us. A decision as simple as that of wearing a mask is embedded in complex cultural, social, cultural and economic habits and constraints. Design and technology both operate within social contexts and are shaped, sometimes in unexpected directions by them. Consider, for example, an image I sometimes share with students, of a bathtub in Gurgaon, turned into a planter by the side of a road. “Point of View: Identity, Power and Policy” aim to help students understand these connections but without invoking at the outset too many of the conceptual apparatuses that scaffold their study. In other words, the module chooses a parsimonious conceptual toolkit, emphasizing instead intellectual discovery.

While almost all teaching of social science is deductive, “Point of View: Identity, Power, and Policy”

their social contexts. The deductive versus the inductive is an old methodological divide in social science. The former applies general principles to specific situations; the latter seeks to infer general principles from specific situations. Though most education in India remains wedded to deductive approaches, a moment’s reflection shows us that humans are primed to discover principles of social action through experimentation. No one can sit a baby down for a lecture on nutrition or danger. Instead, human young arrive pre-equipped with curiosity and drive to learn more about the worlds in which their lives will unfold. Yet, Indian school education inverts this capacity on its head, tying down young bodies into straitjackets to force-feed concepts for which young people find little use in their everyday lives. In the process, it snuffs out the curiosity and will to explore that informs successful adaptation to social and natural contexts.

Yet, the analogy of the baby can go only so far. Recent studies have put into question the idea that human young are born entirely as blank slates; the pre-natal environment shapes their subsequent personalities in many ways. For college-age students, the model of the tabula rasa applies even less. Connecting new learning to prior ideas is the key to success in learning outcomes, a wide body of research on pedagogy tells us.

Learning is to be inductive but students also have their preconceived notions as well as adaptive resistance to classroom teaching. This Gordian knot of constraints seems impossible to break. A radical solution is called for: teamwork and curricular co-creation.

Co-creation in educational settings is a well-known and surprisingly versatile approach. In “Point of View: Identity, Power and Policy”, students choose among the structured assignments they are offered, and in consultation with the instructor, they decide the texts they will analyse. In 2021, for one pair, their text was the classroom experience itself and the interplay of power between instructor and students in online and offline modes of instruction. For another, it was the digital platform Discord which allows users a variety of roles, powers, and choices of identities, including gender identity, subject to a self-defined “constitution” of sorts.

More numerous to list, however, many other students chose cinematic texts. Narrative fictions are one of the most powerful laboratories available to humans to try out social rules and limits of identity. In negotiating texts with partners, the more committed readers ended up with popular movies and television shows. The remit was simple: analyse one scene through the lens of identity, power, and policy, broadly understood. Ask “what if” any of these elements changed? What would happen to the others? And anchor your analysis in a real-world context.

Ranging from analysis of inflationary dynamics in the show Money Heist to gender relations in Dangal to meditations of power in the Marvel universe to the human-animal power dynamics in the Australian movie Penguin Bloom, many students amazed me and themselves with the insights they derived. For one pair, a non-boring romance pick in Shubh Mangal Zyada Savdhan led to an investigation of Article 370 and its abrogation. For another, a study of Captain America led to the realization of the important role of the United Nations. Even more surprising were the pair who after much obsessing about Attack of the Titans turned in a remarkably sophisticated analysis of the intractable causes of the COVID pandemic.

Inductive learning, teamwork co-creation, and imaginative play are only three of the elements of a pedagogy that seeks to empower students with the skills and mindsets they will need for a tumultuous 21st century. Transparent grading is another one for another day. Equally important is the time students make their learning visible to one another by putting their work in the public domain. That truly is the Ah-ha! moment.

The writer is an associate professor at Anant National University, Ahmedabad. The views expressed are the writer’s personal.