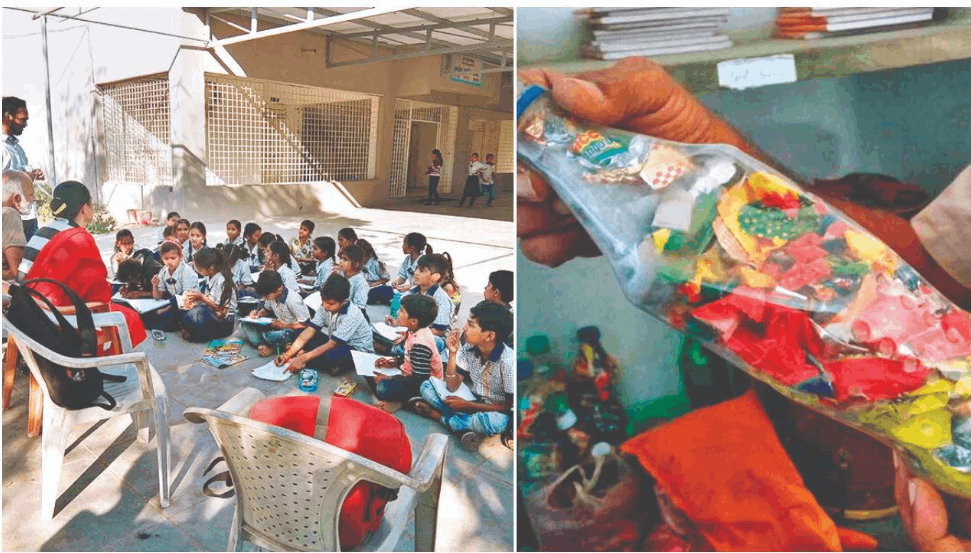 Nothing can describe the phrase ‘best out of waste’ better than the initiative undertaken by three fellow of Anant National University — who launched a community-based project of sensitising people about the hazards of plastic waste and how to reuse it.

The result? The village of Manipur in the outskirts of Ahmedabad can now build you anything out of the waste plastic bottle, from bottle bricks to artefacts like planters and an entire room!

VK Bhadrwaj, Shazaman Saiyed, and Manita Sharma began the project by engaging with the community, particularly with the children from local government schools and their guardians. Over time, the school and panchayat of Manipur Gam have come together committing themselves to collecting plastic waste, which can neither be reused nor recycled, and using it to reuse or recreate.

Around 35 children from elementary and middle school have shown equal might and dedication in collecting plastic waste from their household and neighbourhood, thereby becoming “warriors against plastic”.

The trio intends to use tightly-filled plastic bottles as bricks to build an enclosure glued together with stabilised earth. “Through our extensive community engagement, we found to our surprise that people did have a genuine understanding of the dangers of plastic but they felt helpless in putting a stop to this nuisance created by their own actions.”

The execution phase is under process and the fellows are hoping that the residents of Manipur Gam will soon have a cleaner village and that plastic in all forms, including bottles, can be turned to something that serves a purpose.

“While this intervention in Manipur Gam by our fellows doesn’t change the fact that much of the responsibility for producing plastic waste lies at the source of its production, the bottle brick project they are executing offers a way to deal with the plastic waste that has already accumulated.” said Vrushti Mawani, Live Action Project Lead at Anant Fellowship.

In the long run, the students are hopeful that such projects would set an example for other such villages and communities of Ahmedabad. “It is heartening to see these young people persevering against all odds to make a positive change in the lives of people and to protect the environment which rightfully belongs to them. By nurturing solutionaries, we aim to take education out of the classroom and into the world where it can be meaningfully applied,” said Garima Aggarwal, Director of Anant Fellowship.